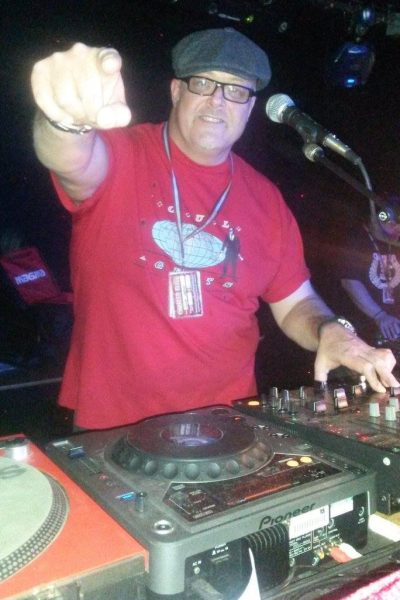 I was born in East London and grew up on Canvey Island and was lucky to be exposed to all things soulful at a very young age! From the age of 15 (being a tall rugby playing type), I was a regular at Canvey’s Gold Mine with DJ Chris Hill aided by Tom Holland, Jeff Young, Froggy, Bob Jones and others. From that the passion was born and my first Caister experience followed soon after.

I started DJing in 1981 at Canvey’s Monico Club (CB Radio night!) and as well as mobile work, I progressed to Essex pubs, clubs and more over the next 20 years. Highlights include, Shades Nightclub Canvey (with Greg Edwards), Kings Club Canvey, The Old Windmill Hanningfield (with Gary Dennis), The Sam Lords (Benfleet), Turtle Bay (Southend) and Peers Nightclub (with Dr Bob Jones) on Southend seafront.

After a lengthy break, I was enticed into radio in 2009 and my “Saturday Soulmine” show was born and continues to this day. I also started a club night called “Soul By The Jetty” (nod to Canvey’s finest band Dr Feelgood!) in the same year I was lucky enough to win the ‘Soul Survivors’ magazine’s ‘Best UK Soul Club outside London’ continuously between 2011 and 2019. Regular DJ guests included, Jeff Young, Paul Clark, Fitzroy, Neville, Les Knot, Gary Dennis, Ginger Tony and most of the then; Caister DJ’s on rotation. ‘The Jetty’ returns occasionally post-pandemic so listen out for updates!

I was lucky enough to join the Caister DJ team in 2009 (led by the Guvnor Chris Hill), starting on radio then moving into different rooms and the BBQ, finally progressing to peak time main room sets, replacing Chris as he retired. I also managed to indulge musically with specialist sets such as, ‘Bongo Beats’, ‘Boogaloo Beats’, ‘Jazz Juice’, ‘The Big Bad Bald B Boyz’ and more right up until the weekender’s sad demise in 2020. As well as Caister. I’ve also played regularly at Margate Soul Weekend, Kent Soul Sessions, Essex Funkers, Soul Reunited, Soul Fiesta, Killer Soul, Papillion Reunion, Brighton Beach Party and many more.

Remember: ‘Staying in IS the new going out’:-) Hope to have the pleasure of your company!